skip to main | skip to sidebar

I recently realized that a common management technique that I see every day (and do for better or worse) is called management by exception.  I didn’t really think of it as a style, or even having a name, though I had actually been thinking about it in the last few months because I saw that the technique was causing problems to develop.
Essentially this technique assumes that employees know what and how to do something, and corrections are applied when something blows up or, if being watching more carefully, mistakes are seen.  This makes sense in many ways.  For instance – when building flats, most carpenters I work with know how to build a typical flat & I would not expect to have to teach them this skill (generally, there are of course situations where this would not be the assumption).  If the carpenters are in the middle of building flats and I see an error in construction (perhaps the plywood corner block has the grain going the wrong direction) then I would stop and correct it, and hopefully the carpenter would not make that mistake in the future.  The technique makes sense because it is difficult to know what someone else knows and doesn’t know.  At the same time people don’t always know what they don’t know – which could prevent them from asking question.  The system streamlines a particular workflow, and only stops when there is an observable issue.
Management by Exception is a transitional model of leadership – it is based on tasks and does not really consider needs of the subordinate or personal development – just the job at hand.  It can be done actively – when the manager watches closely for mistakes and then corrects them, or passively, when corrections only occur after a problem has arisen. The issue is that it always a negative transaction – interactions always happen after mistakes have occurred (there is no focus on catching people doing things right).  In my experience, and what made me think about this style before I even realized that it was an actual style, is that when corrective action is applied frequently it creates a situation that is not very positive.  While avoiding the transactional leadership style completely would create the most positive experience – I think that there is still room for management by exception as long as there is focus on catching good behavior not just problems.

The class I am currently taking is about different leadership styles.  While I have taken other leadership courses, they usually come from the point of view of a particular style and attempt to develop leadership potential from only that point of view.  This class has been interesting because it talks about the history of leadership and how different theories of leadership have evolved, as well as exposing me to styles that I have not really considered before.  I think that leadership typically calls to mind particular traits – visionary, charismatic, authenticity, for example, and those traits are parts of many theories, there are other theories that are much more behaviorally based, and can be easily learned and used to improve leadership skill.  In particular there are several that I thought were relevant to technical theatre environments.

Leader-Member Exchange Theory.  Have you ever noticed that in some environments there is an in and out group – and that some people are more likely to stay than others, and that the “in” group has more information than they others?  This theory talks about that phenomenon.  I don’t think that this environment is ideal – I think it should be avoided, but understanding what is happening will help you identify what is going on and possibly move into a position where you will receive more information, or would help you break the cycle if you are the leader in this situation.

Path-Goal Theory assumes that subordinates will do a good job and be motivated as long as they believe that they can do a good job (capable of performing their work), and that the reward for doing the work is worthwhile.  The leader here seeks to motivate his/her employees.  This style also emphasis removing obstacles, clarifying goals, and supporting the people doing the work.  I identify with this style of leadership most closely because it is such a close fit to how I see myself and my responsibilities as a project manager.  This theory identifies 4 types of leader behaviors (directive, supportive, participative, and achievement orientated) that can be used based on the task and the subordinates needs to provide proper motivation and support.  Finally, the theories include subordinate characteristics (need for affiliation, structure preference, control, and task ability) that must be considered by the leader when choosing their own leadership behavior.  While somewhat complex, it is a situational approach that focuses on removing obstacles and clearing the way for your staff to do the best work possible. 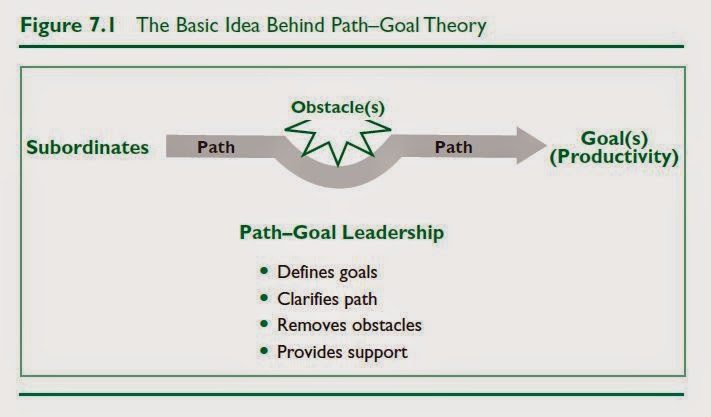 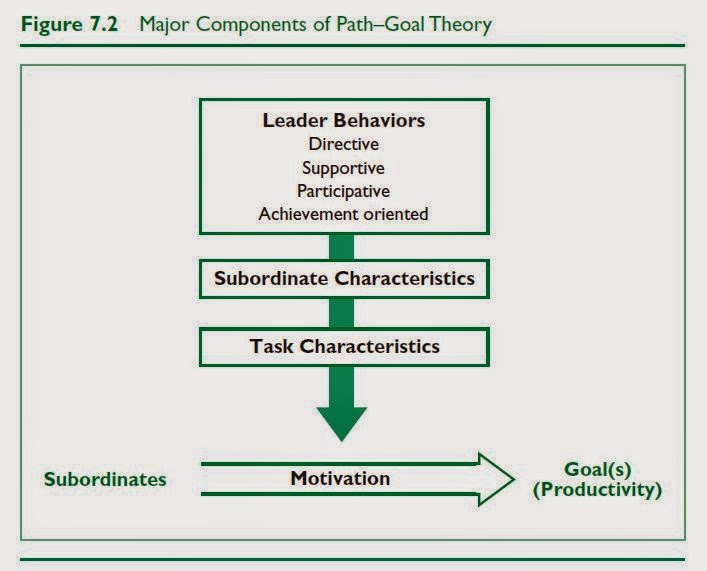 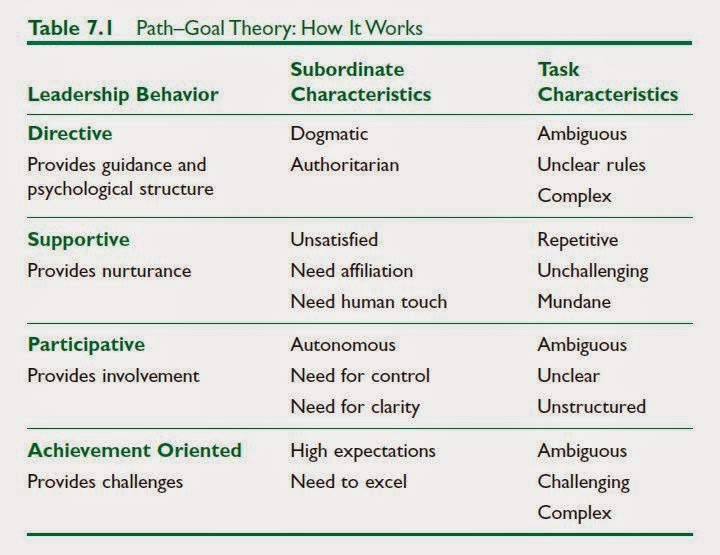 Contingency Theory attempts to match leaders to specific situations creating a match where they will be most successful.  Obviously this doesn’t work in all situations, but can be used in looking at what approach would work best.  The theory looks at leader-member relationships, the task structure, and the leader’s positional power, as well as the leaders preferred leadership style.  A chart shows what situations the preferred leadership style is most effective in.  The leader’s style is based on an assessment on the LPC scale (least preferred coworker) which separates leaders based on relationship versus task motivations. 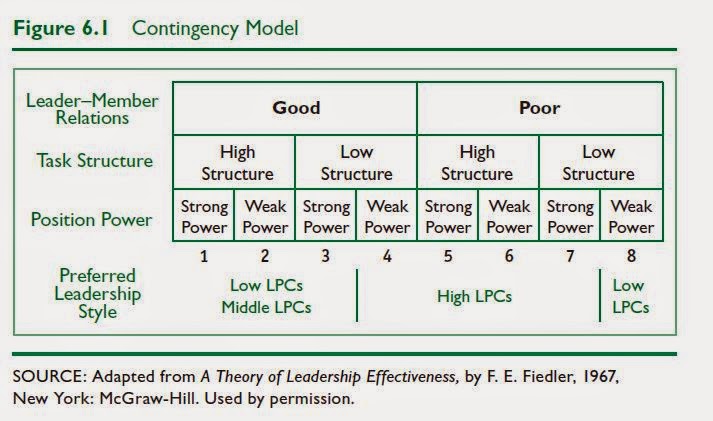 Situational Leadership.  I have encountered this several times before & I find it useful for determining behavior in a situation.  This approach looks at the skill of the followers, and has a chart based on two factors – supportive behaviors and directive behaviors.  This creates four styles: Delegating, Supporting, Coaching, and Directing.  Based on the skill of the employee and the task, a leader can determine which role would be most effective for the situation. This approach assumes that the leader should adapt to the abilities of their subordinates. 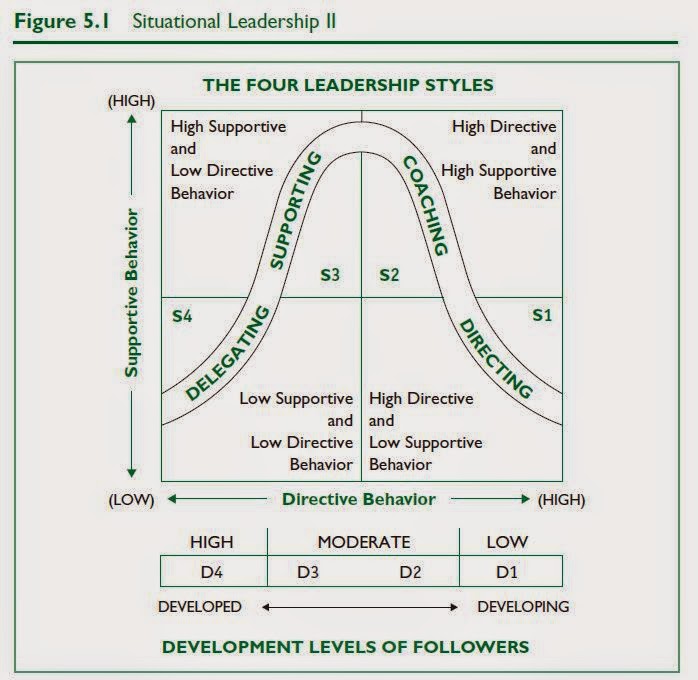 I think that I struggle with seeing leadership qualities in average situations.  I tend to associate leadership with great people (Lincoln, Roosevelt etc).  I think that it is very easy to see leadership flaws in people that I interact with, and I needed to take a step back and view these interactions from a grander viewpoint.  Leadership and change are linked – and change is hard, especially organizational change, which I think also minimized leadership accomplishments of those I know.  I also have started to consider that leadership often happens in small moments – not large ones.  For instance, I had a hard time talking about transformational leadership because I viewed it only in terms of large transformations.  Yet I work in an industry that frequently mentors others, and these mentors are exhibiting transformational leadership.

While most leadership books (at least those that are meant to develop leadership abilities) assume that leadership is a skill that can be developed, many rely on personality and traits, that I fee are more difficult to change.  The approaches above, to me, provide very concrete concepts of ways to increase leadership ability based on context.  In some ways, I think that had I taken this course prior to some of the other classes I have taken; I would probably have viewed them differently.  On the other hand, I don’t think that a single exposure to a thought or concept allows full development of the idea – the more often ideas are thought about and developed, the more concrete and meaningful they become, and the more they become woven into your practice.

Images are from Leadership Theory and Practice by Peter G. Northouse.
2 comments:

Colossal has an article about an artists named A. Boogert who made an 800 page book about mixing watercolors and describing the paint colors - somewhat similar to our modern day pantone color books. Its really quite a remarkable accomplishment and tool, and a wonder that it has survived.

The book can be viewed here.
No comments:

L Jean Burch
TD Tidbits started for me because I wanted a place to store and share information, ideas, products, resources, and technical solutions. A record of sorts of where I have been and where I am going, and an attempt to not lose all the insights, ideas, and products that I find while in a project. As each project is different, it can be tricky to remember that great product that you found for show x a year and a half ago. My hope is that this blog will not only help with that, but provide a resource to other that will help them as well. More about me can be found on my website: www.ljeanburch.com.

As I have passed my 100th post, and it appears that its more than just me looking at this page I thought I would put a few disclaimers out there. Ideas, opinions and so forth are my own and not necessarily represent the company in which I work. Products and services that I recommend/link to/ or otherwise discuss are done so without any connection to said companies or products (other than being an end user). And while most of the stuff I blog about wouldn't pose a hazard if you tried it at home, before attempting any projects I might mention or recommend make sure you have all the info you need to go about it safely.All that said, I hope you find something useful or interesting as you read the site. If you have questions, concerns, ideas, I can be reached through email at ljeanburch@gmail.com.